As promised in my blog post two weeks ago, I am posting my current acclimatization progress and current experimentation.  I also warned you that there would be some graphs but don't worry about these details, the story can easily be followed even if you pass over them.  Here goes...

Prior to getting my Hypoxico unit, I used to acclimatize the old fashioned way - by earning it on the mountain.  Hypoxic training also forces me to earn it but I earn the altitude at a more leisurely pace in the comfort of my own home.  I get to eat home cooking, sleep in my own bed, and recover between training sessions with all the support my house, family, and friends provide.  When I climbed Denali in 2011, I found the going pretty easy with a few exceptions.  The first exception was between 14K camp and high camp (17.2K). 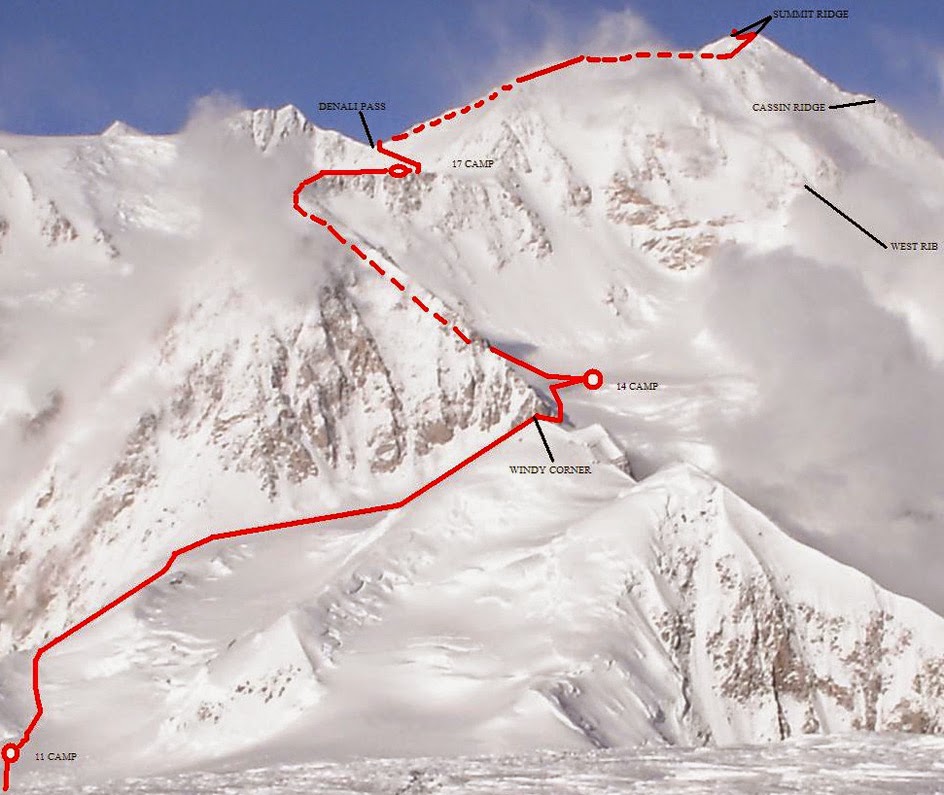 The climb up the ridge was really slow going due to slow acclimatization and a fierce crosswind.  Glad I had a pretty full beard during that climb or else I would certainly have battled a little frostbite on my face.  OK, back to the acclimatization...

The 3,000 foot climb on that day really zapped me.  I was comfortable at all the previous altitudes but that day I eclipsed my highest climb to date and felt every bit of the altitude change.  Additionally, I expected to be out for no more than 5 hours but the 11 hour ascent left me with little water and even less food.  I vowed that day would be my last to struggle up a hill unprepared for the altitude.

Denali was a brief climb - 11 total climbing days that included 2 full rest days and almost a full day waiting to fly out from the Kahiltna glacier. 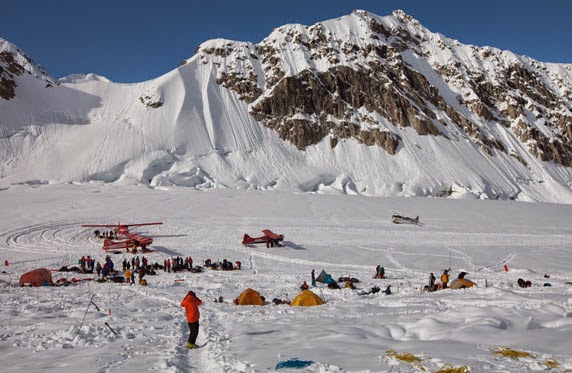 We made great time but I felt the altitude twice.  Yes, once from 14.2 to 17.2 and the second time after I summited and had to wait for my climbing partner at Denali pass (for 4 hours).  The dry air really affected my asthma and I had a rough descent on the Orient Express.  Again, these problems prompted me to learn more about acclimatization and how to prepare more efficiently for high-altitude climbs.

While on Denali, I ran into Brian Oestrike who stopped by our camp while trying to summit on a what looked like a casual weekend stroll for him.  I wish I had a picture of his kit but it was almost too sparse to believe.  He had the usual sled behind him but on that sled was his clean mountain can, a small parcel of gear, and some odds and ends.  All told, he probably had 25-30 lbs of gear behind him while most of us had 80 lbs of gear on our sleds and an additional huge load on our backs.  I leave it to Brian to set the record straight on the actual weight of his kit but suffice it to say that I am hardly exaggerating when I say his gear weighed less than 25% of mine.  I had to know how the heck he did it.  So I asked.

Brian was and is an affable guy.  He took the time to describe his training (in NYC of all places) and I immediately took note that I could do the same in Fairfax, VA.  We chatted briefly and he headed on his merry way up to high camp.

I returned home with a new-found vigor to pursue "at home" acclimatization and found his company on the web in no time.  Once I did a little research, I promptly ordered a hypoxic unit, tent, and mask to try out. 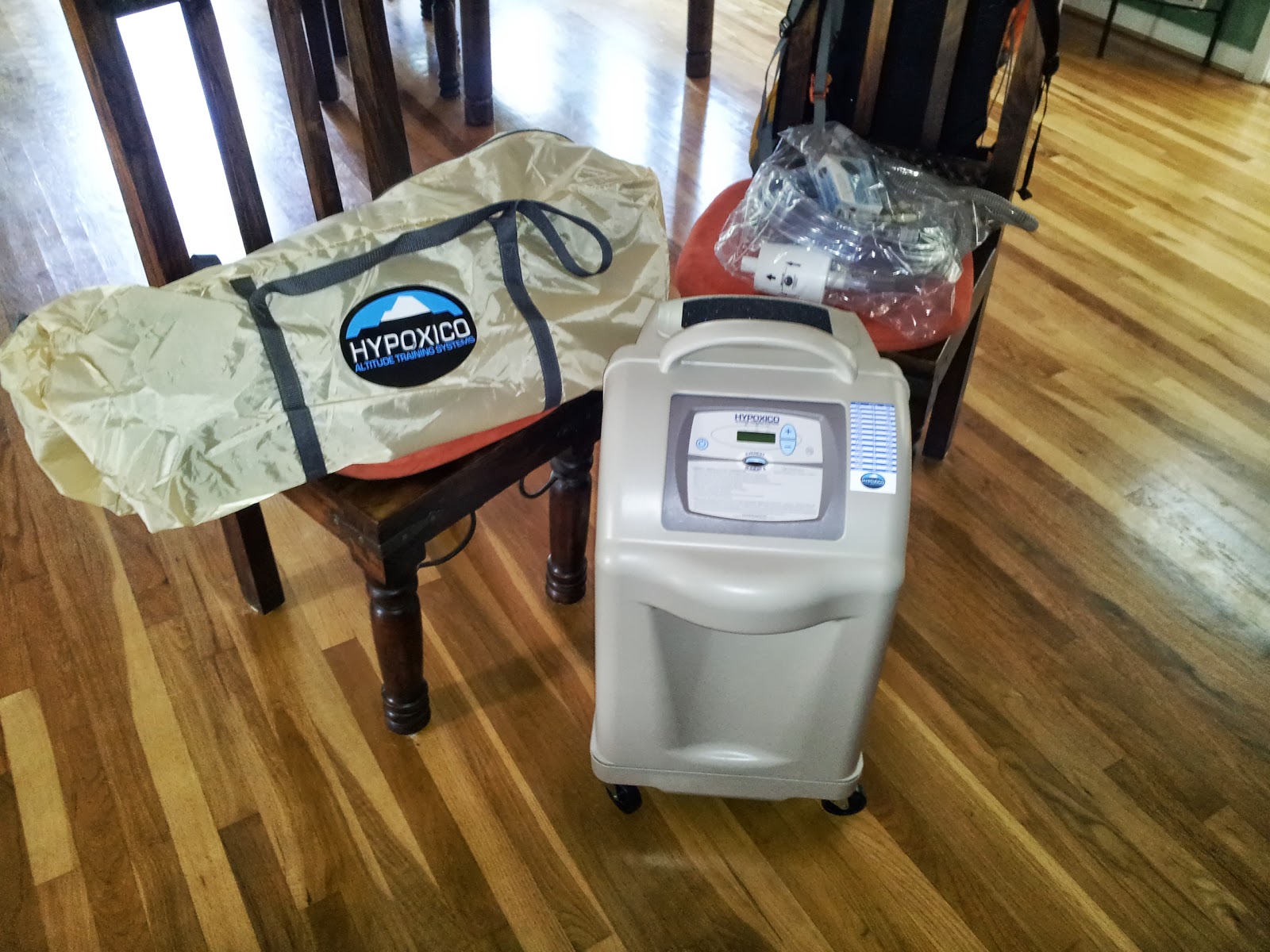 My do-it-yourself (DIY) acclimatization project began in earnest in June 28th, 2013.  Yeah, it took me a while to make up my mind but I was ready to try out this experiment with full vigor once I got the equipment.

The data from Denali and my 2014 Everest preparation

I want to start with my Denali data because that tells a simple story.  Here is what happened while I was climbing: 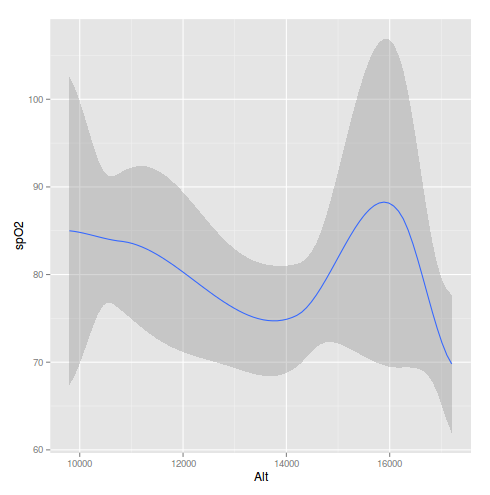 The blue line represents a smoothed (loess) relationship between altitude and percent oxygen (spO2 via fingertip oximeter) while the gray area represents the uncertainty around the blue line.

My spO2 slowly dropped from KIA (7,800 feet) until 14,000 feet when I started to drink more water - almost forcing myself to drink a liter each night before falling asleep.  Note that any value below 90% usually sends ER doctors into extreme action.  For mountaineering, these values are not out of the ordinary.  Dipping below 70% at 17,000 feet, however, provides some reason to be concerned.

Last year, before heading to Nepal, I began my acclimatization where I tried mightily to improve my spO2 with each week of training.  Here is how I fared: 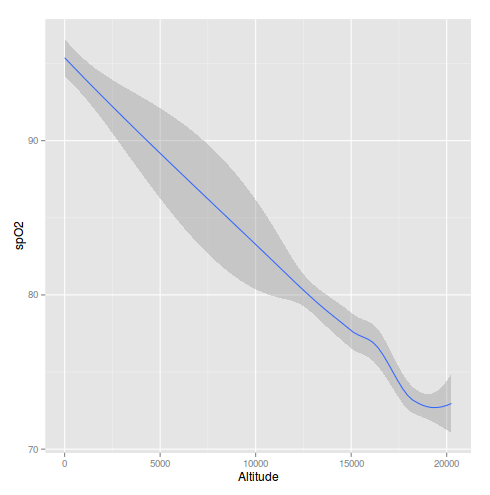 The 2014 data looks hardly like an improvement over my Denali data.  I still dropped a fair bit from an ideal 80-90% but there were some remarkable differences between 2011 and 2014.  First, I learned more about my response to altitude and these revelations provided me with some comfort moving forward.  The most important thing I learned was that breathing more rapidly than I would typically breath dramatically increased my spO2 - sometimes by as much at 10%.  My discovery gets masked by the curve above.  Second, the data I presented for Denali are all from a rested state - that is, I recorded my spO2 and altitude either before bed or after waking up.  The data from my 2014 acclimatization process were all recorded during exercise.  Want to see how exercise intensity affects spO2?  Well, here it is: 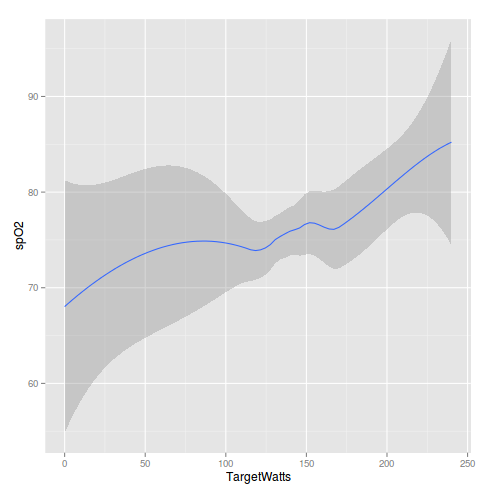 The harder I trained at an altitude, the higher my spO2.  Thus, my training data (non-resting) does not match my resting Denali data well because of the difference in intensity.  A better comparison might come from my sleep data where all recordings came after I woke up from a night in the hypoxic tent: 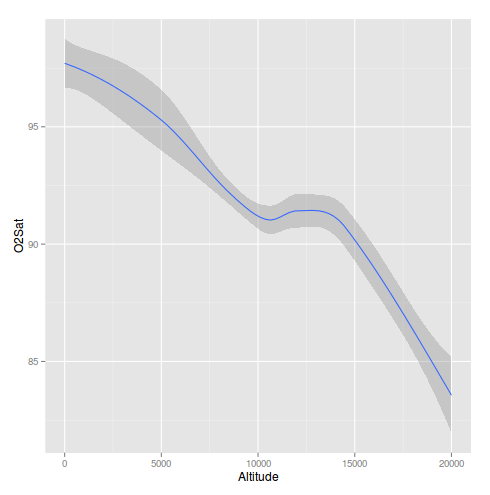 Whoa!  Now that figure above shows a HUGE improvement.  Note that my spO2 (O2Sat in the figure above) never dips below about 83%.  My training data had spO2 values well below 75%.  Also note that I kept my spO2 above 90% up to 15,000 feet.  Not bad if you ask me.  I felt great for most of this time and certainly better than how I felt on Denali.  How am I doing this time around?  Well, here (below) are my data in the morning after sleeping in the tent: 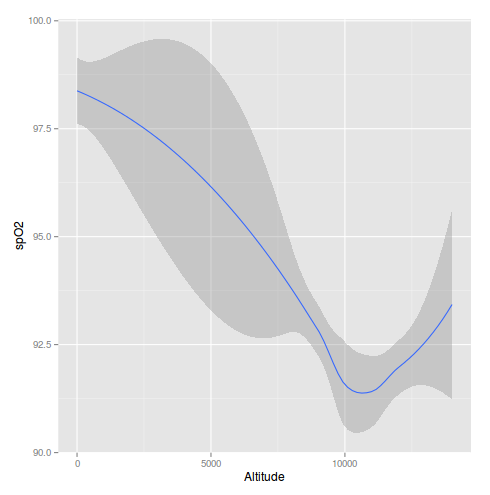 Note all values above are above 91%.  I have yet to wake up with spO2 values below 90%.  Now there are some reasons for these high values.  I changed my acclimatization approach this year and intend to test the approach on Rainier and Aconcagua.  Instead of pushing the envelope in the tent (live high - train low), I chose to train harder and higher - climb high - and then sleep low at about 12,000 feet.  Below is a figure that shows my hypoxic training values. 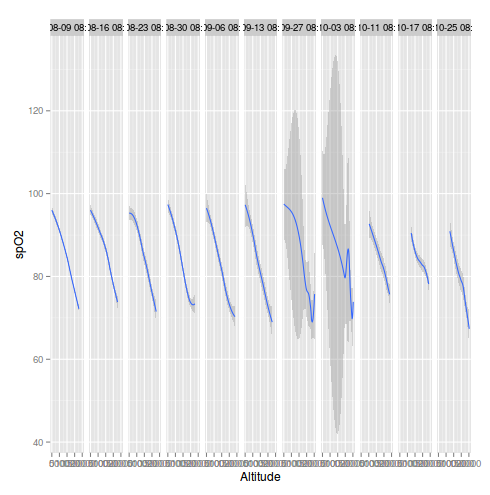 I plotted each "test set" or simulated climb in its own panel so I could compare my progression by week.  The earliest date was August 9th and the data contains simulated climbs through last Saturday (October 25th, 2014).  I began with relatively easy simulated climbs where I started the climb at about 5,000 feet and then went to about 17,000 feet.  The past few climbs started much higher (12,000 feet) and went all the way up to 20,250 feet.  Obviously the degree of difficulty of these climbs changes.  What I am looking for in these climbs is a systematic shift upwards of the curves.  Last week seems like a setback from my progression from the previous two weeks.  I was making great progress but last Saturday I had much lower spO2 values for the same simulated climb.  My first guess on why is probably due to a higher intensity.  To see if my hunch is correct, I plotted the data for altitude and wattage: Nope.  Looks like I am getting slower at the same altitudes; time to revisit this approach.  Sleeping at lower altitudes might not be as effective as I expected.  Despite the data, I intend to test out my fitness on Rainier and Aconcagua.  My intent is to sleep higher as I go but right now I wanted to remain fresh at night, recover from the increasing workload, and train harder during the day.  Obviously, something is not going right with my simulated climbs.  I expected to be doing better each week.  What the data indicate above is that my weekly simulated climbs are getting harder and harder.  The anomalous data from October 3rd came from a simulated climb where I bonked.  My comments from that day were "whoa!  got off the bike; cut it short after I bonked."  Well, that comment speaks volumes.

So where am I now.  I remain committed to test out this climb high - sleep low approach for the next few weeks before I take off for Argentina.  I wanted to test this approach because sleeping in the tent at high altitude really affects my night's rest.  Prior to leaving for Nepal last year, I averaged about 4 hours of good sleep at 20,000 feet.  A few months of sleep deprivation (8 hours is my goal) might really affect my cognitive performance.  Thus, I wanted to try a different approach.  Sleeping low also allows me to continue sleeping in my own bed with my wife - both pluses in my book.

Hope you enjoyed this long post about my current acclimatization routine.  Stay tuned for a post about my gear for the three upcoming climbs.