Today was a landmark day for my preparation towards Everest 2015.  I am resting today and consuming a ton of calories in preparation for more training before two 2014 climbs.  Here are the updates from this week:

1.  Everest 2015.  I heard some great news from Dan Mazur today.  His group - Summit Climb - is honoring our oxygen and (unused) Sherpa fees from last year while the Nepali government continues to promise that our $11,000 climbing permits are safe for this year (2015).  In short, I am going back and now I have a better idea about the costs and timing.  There are still a few fuzzy details but Dan's email to the climbers from 2014 seemed rather clear.  He intends next year to be an inexpensive return for us all.  I want to thank Dan and his group for coming to this concession.  Last year was an odd one and I am sure it hit everyone pretty hard; I was just not willing to be among those who shouldered the huge economic burden.  If I were independently wealthy and had tons of discretionary time, I might consider taking one for the cause but my finances/time are limited and I am I just so thankful that we did not need a protracted discussion with Dan to get a reasonable settlement.  Thanks Dan.  For those interested in climbing big peaks, remember the expedition teams like Summit Climb who treated their climbers well after last year.

2.  Rainier push in late November.  The details about climbing Rainier in late November remain pretty sparse on all the internet sites.  Most summits occur during the summer.  Here is Steph Abegg's figure produced from the available 2006-2010 NPS data: 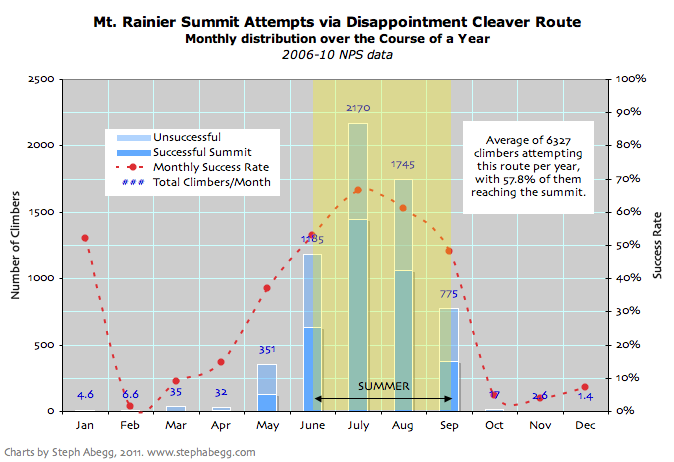 If you get a chance, please visit Steph's page.  She was kind enough to let me link to her figure rather than forcing me to recreate the figure from the raw data.  Thanks Steph.

I chose to show the Disappointment Cleaver route in the figure above because I suspect that might be the one route available if there is a chance to summit.  Here are a select number of routes and the success rates by month throughout the year (again, from Steph's website): 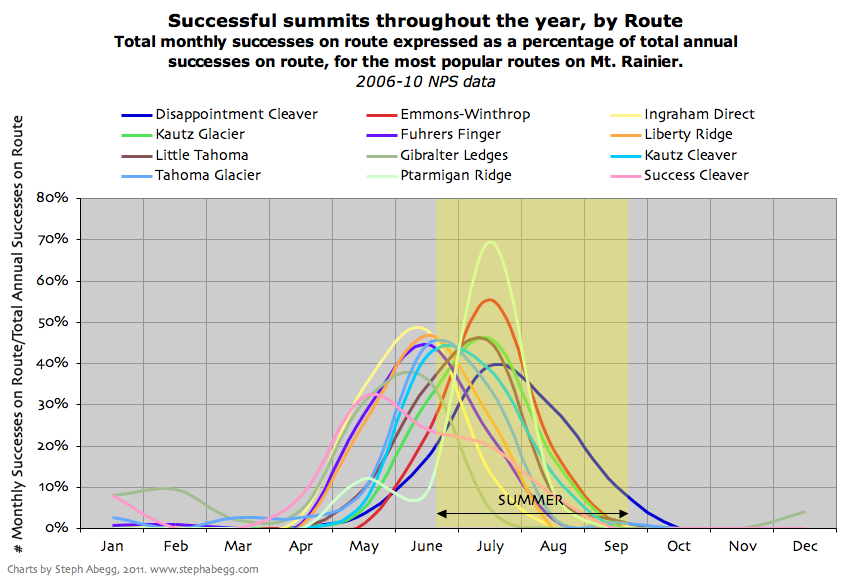 The blue curve that creeps most to the right is for the Disappointment Cleaver route.  I will see how the route shapes up over the next few weeks.  Suffice it to say, there will not be a ton of traffic on the hill when I get there in late November.

My aim is to get up as high as possible without an overnight stay - one hard, fast/light push up the hill until I turn around and head for civilization.  I just want to see how my legs and lungs handle the fast push up the hill.  It should be a fun outing.  Expect more details later as I figure out my route and gear list.

3.  Argentina climbing in Dec. 2014 - Jan. 2015.  Our flights are booked and the dates are settled now for our trip to Argentina.  I land on December 6th and plan to get out to several ranges before I meet up with my family and Brendan Madden on December 20th.  Here are some ideas I came up with while trying to figure out how to use my time alone constructively.

Option 1:  Climb in the Cordon del Plata (CdP) range for 10 days.  According to summitpost.org, the CdP is a "little sub range to Los Andes. It's conveniently located along the highway which also takes you to Aconcagua, the giant of the South American peaks. The area has gained a lot of popularity in the last couple of years and many climbers use it as an acclimatization ground for the higher peaks. The easy access, the short distances in between the peaks and beautiful views has also contributed to CdP's positive reputation. There are lots of peaks within a few day's walk and even if most of them are easy scrambles along the normal routes, also more experienced climbers go here for some challenges."

What I like about Option 1 is the opportunity to see other parts of Argentina while I acclimatize to higher altitudes.  The central valley of CdP offers easy access to 9 peaks ranging from 4080m (Stepanek; 13,386 feet) to 5930m (Plata; 19,455 feet) that would consume at least a week if not more of my two week head start.  Also, I could acclimatize to the high altitudes with little time pressure for the eventual 6962m (22,841 feet) climb on Aconcagua.  The time alone could also prove worthwhile for me to test out speed and recovery.  Here is Pico Plata from the south: Option 2:  Climb a more technical route on Aconcagua and summit before the rest arrive.  I thought about this but the timing might not be great.  My responsibility for the climb is to establish our mule transportation and food for the entire group before they arrive.  I take that responsibility seriously but if I could take care of most of those details before I arrive then I could climb on the hill until they arrive.  One route that piques my interest is the Polish Glacier Direct route (thanks summit post): That route would require about 10-12 days and give me plenty of time on the glacier and high up on the hill.

There are a few drawbacks to this second option and one major advantage.  Drawback 1 (cost):  One downside is that the Aconcagua climbing permits are good for 20 days and an early climb followed by my family climb would require two permits (roughly $1300 in total).  The fees and logistics for the two climbs might make the two-climb push really hard on me both financially and logistically.  Drawback 2 (limited adventure):  Another drawback is that a more technical climb only allows me to see one mountain for the first four weeks of my trip.  Granted, I could easily retreat from Aconcagua afterwards and explore the CdP alone when my family takes off in early January but I might prefer to rest and relax in sunny Mendoza after climbing with my family.  Major Advantage (lower stress with family and friends):  A big climb before the others arrive cuts the stress on me during their climb.  I want to see the summit and they may not be as enthralled with the summit push as I am on summit day.

Option 2 seems more appealing at this point but I need to figure out the logistics for mules, food, and transportation before I jump into another route - especially a more technical route that I would solo.  Additionally, the mountain may dictate the options more than my preference.  If unstable snow or poor ice conditions exist then a solo ascent up the Polish Glacier Direct would be foolish choice.  I expect a return trip no matter what the conditions so prudence trumps preference.

4.  Training going well.  Yep, not much to report.  I remain fit, fat (relatively speaking), and happy with no injuries to report and an overall good attitude that dominates my current situation.  I am so excited about the upcoming climbs that I can barely focus on much of anything else....but I do continue to chip away at the piles (megabytes perhaps?) of papers to write and grants to finish.


More on these later.  Thanks for reading and feel free to post any opinions on my options or provide other options for Argentina.  I'm open to other ideas.  See you next week.
Posted by pem725 at 12:20 PM