Sorry for the radio silence.  It was a busy week of work and errands before we push off for the last leg of the Triple Crown.  So, what have I been doing and what is my Dad up to?  Pour yourself a nice refreshing beverage and start reading....

I have more information about the swim.  The event organizers sent out a flurry of email updates and I will dutifully relay them to you readers here.

First, I will be one of the 9 swimmers participating in the event this year.  The other swimmers hail from as far away as New Zealand - via the Netherlands - and a few are as local as I am.  The list of swimmers, crew, boat assignments, and observers can be seen on the NYOW website.

You'll notice that we leave the boat landing at 7am but don't start the swim for another hour or two.  The start is staggered based upon the expected pace.  I put down an average 1:40 pace per 100m - my forever pace.  I can't swim a ton faster but I can keep that pace for probably 24 hours.  So, based upon that pace, I get to start at 9am (see above).

Third, the organizers sent us some expected times for specific landmarks along the swim.  Here are the expected times based upon my pace, the current, and probable weather/wind conditions.

The numbers above indicate the location on the map below with one exception.  The finish is the same as the start so I placed that at the red bold #1 below. 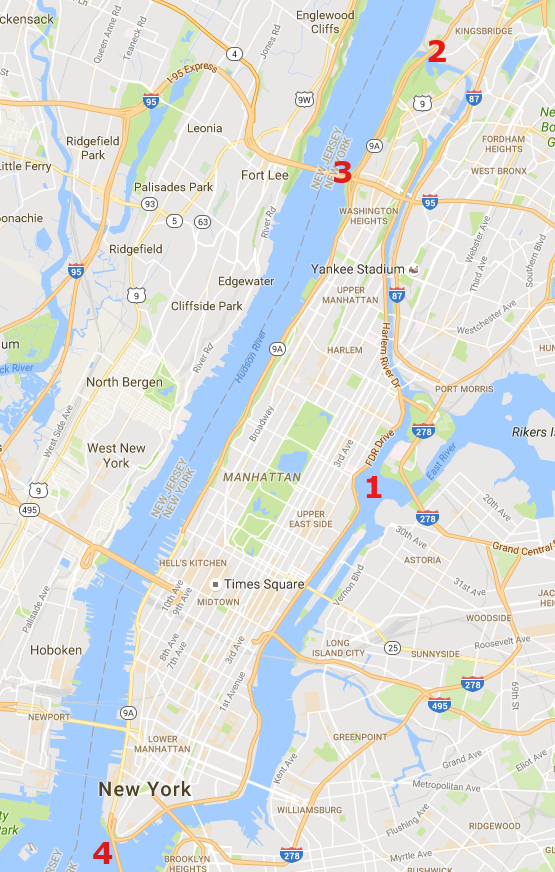 Finally, I did a little research to find out about the tides and conditions I am likely to face during the day.  Here are a few snapshots of the currents in and around Manhattan.

Start @ 9am (high tide is at 8:31am) You can see that the tidal flow from the figure below is a mighty 3+ knot push up north.

The left most figure above should be the conditions I see at the start.

Henry Hudson Bridge @ 11:02am (2.5 hours after high tide) Roughly 2 hours later, I round the northernmost tip of Manhattan with a 1.2-1.7 knot current pushing me around but then get hit with a slight current against me for a little bit.

George Washington Bridge @ 11:43am (3 hours after high tide) I should get a slight current against me for this bit between the bridges.  At most, the current will be at about .3 knots - not terrible but still against me.

The Battery @ 2:15pm (low tide starts at 2:24pm) The figures below show the currents for low tide.  At low tide (the leftmost figure), I see a 2.6 knot current in my favor.  The trouble starts when I round the Battery and start heading up the East River.

Finish @ 4:29pm (2 hours past low tide - third figure from the left)  The current appears to be about 2 knots pushing me toward the finish at this point.  One thing to note, however, is that I will have a slight current against me from 2:30pm until 3:30pm. During the last leg to Mill Rock, I will have an increasingly strong push from the current where it should be roughly 2 knots to my favor.

I chatted with my Dad many times over the past few days.  He is doing fine after a slight setback.  A few days ago, he fell - nothing serious but he was really concerned about his hip.  He was trekking along with some young teenager, chatting up a storm with the 60+ year younger friend when he slipped and fell trying to cross some water.  As usual, he refused help and managed to make his way into a small town 8 miles from where he fell.  Once there, he checked into a hotel where he soaked his wounds and then later took a cab into Pamplona to get checked out by a physician.  All is well with him now after getting an anti-inflammatory shot and some other pain meds.  He recovered over the next few days and resumed his trek on Thursday (2 days ago).  I intend to chat with him before I swim so I'll have more to report.

Also, I have tons more to post about his trek but need to head out to a party and then catch a train up to NYC.  More later.