The dark side to routines

When does a routine become a liability?  I suspect there are few of us who ever think about these problems unless the routine involves some vice like sex, drugs, and rock-n-roll.  Routines are things we set out to develop and hone over the years.  We want to have routines that are positive such as a routine to eat well, exercise, go to bed early, and such.  These positive routines, however, may turn out to be a negative when not moderated at times.  Below, I present three stories where my routine turned out to be a curse.

In 2007, I began having chronic heart burn and decided the best course of action would be to lose weight.  My typical weight was around 165 lbs but I managed through various efforts to balloon up to 190 lbs.  Beer was great, food was great, and activity was at an all-time low.  On August 4th, 2007, I started my own program where I simply weighed myself and ate a meal every other hour - a meal that was restricted to 200-250 kcal.  My goal was to lose 25 pounds in roughly 25 weeks.  I did it but there were a few routines I needed to develop.  Along the way, these routines turned out to be useful and then somewhat destructive.  Let me explain more after I explain the figure below.

The x-axis is my days of dieting and the y-axis is my "mean daily weight" taken in the morning and the evening just so I did not take advantage of a time during the day when I would weigh the least (e.g., morning when I was dehydrated).  I also annotated the graph for events that changed my trajectory like our trip to Portland in late August 2007, a trip to see Notre Dame lose to Penn. State, a shift off Nexium (the purple pill - to see if my weight loss changed my reflux...and it did), and finally a trip to Buffalo to see my pal and brother-in-law Pat and his wife Eva.  The figure contains all I needed each week to monitor my progress.

I lost weight steadily just by cutting back on calories, eating more sensibly, and exercising more regularly.  My average caloric deficit was about 940 kcal/day and that equates to roughly 1/4 lb per day and an expected weight-loss of about 1.75 lbs per week.  Right?  The "Figure Below" shows you the bright side of developing a routine.  What you do not see are the days that followed early November when I no longer tracked my weight loss.


Where it all went wrong

Tracking was a good routine.  Eating sensibly was a good routine.  Weighing myself twice daily was not a good routine.  I kept up these routines that I developed over these 90+ days and soon found myself way below my expected and hoped for weight (152 lbs instead of 165 lbs).  Sure, it felt great to be slim and fit but 152 lbs is way too slim for my build.  I was getting sick about every 3 weeks and could not keep warm.  Yes, I couldn't stay warm.  It was winter after all but Northern Virginia has mild winters.  I just couldn't keep warm without any body fat.  Sometimes a routine is good for a limited time and after that time, a new routine is necessary for maintenance.  I got so attached to my routine that it was tough to stop.  The same theme will come out in the next few stories....

Shortly after my son was born (15 years ago), I decided to get a rowing machine so I could workout at home when it was raining outdoors.  We lived in Seattle so it rained more days than the sun shone.  Rowing was going to be a great change from swimming and running.  I read about the benefits of the rowing ergometer (ERG for those who know and hate the machine) and looked forward to starting this new training routine.

It didn't take long before I started monitoring everything with the machine.  I would setup workouts where I could fully recover between sessions but also get both a good strength and cardio workout.  Things progressed smoothly for some time - roughly 3-4 months.  I got into a great routine.  Four or five days per week were spent for 1-2 hours enjoying the machine.  I got the most out of my $900 investment.  At that time, that amount of money was huge.  We were living paycheck-to-paycheck in Seattle during the dot.com boom.  Money was tight so making it last and spending it on good investments mattered.  Again, my routine easily justified the expense.


Each workout equated to a number of beers I could drink without any concern about weight gain or caloric intake.  At this time, I was a pretty good weight - probably around 170lbs and not terribly concerned about weight loss/gain.  Still, I wanted to track my caloric expenditures so I could counter a hard training session with an adequate meal to recover.  A complete meal included a few malt pops and I could count my meal (in beers) after each workout.  So, my routine got stronger.  Of course it did!  I paired a refreshing beer after a hard workout.  Soon, I rowed more for beer than for enjoyment.  The more beer I drank, the more I rowed; it became a vicious cycle and I soon paid a price.  I also increased my intensity and decreased my duration - figuring that the trade-off for beer was far more favorable with that approach.  You'll see in the figure above that the intensity increased throughout my entire training routine.

Four months after I began my rowing routine, I collapsed on the machine in supreme agony.  Never before had I felt such pain and it all radiated from my back.  Well, actually that is not true.  I had a severe problem with sciatica in the early 1990's and I could barely walk then and that pain lasted almost a year.  That sciatica problem came back with a vengeance on this day.  I laid on the ground with my feet still strapped into the machine and could barely move.  It was an awful feeling.  My routine came back to haunt me as I escalated the exercise routine (intensity) - fueled by my thirst for beer - into more of an obsession than a healthy activity.

You knew the story would somehow or another come back to climbing, right?  After all, this is a climbing blog.  Yes, I decided to change my hypoxic training routine from my Everest 2014 approach to a more traditional "climb high, sleep low" approach.  It seemed like a good idea at the time but I stuck with the idea despite several obvious red flags.  Here is what I saw in my training logs: 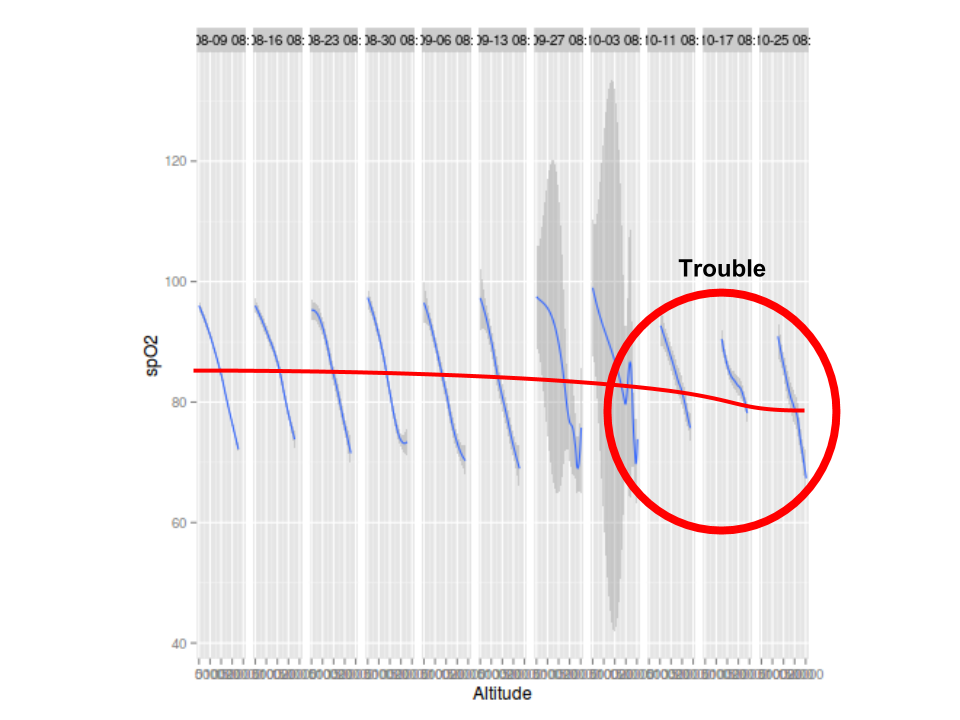 What does this figure tell me (or you)?  Well, as I progressed with my "Summit Saturdays," I was less able to deal with the altitude.  My spO2 values decreased from previous values at the same altitude.  What was worse was that my workloads were also decreasing.  I was overtrained and knew it but stuck to the plan to give it a full test.  Training is good - especially when the routine helps you get fit - but overtraining is bad.  We had a household full of overtrained people.  My wife was suffering from a bad coach-athlete fit and my son was struggling to accommodate an early wake-up schedule (4am) for swim practice along with non-stop weekend meets.  We were one tired family.

Many of you reading this post might think that there is something terribly wrong with me and I suspect you are right.  There are countless things wrong with me but the one thing that is not is behavioral change.  I change.  I can adapt to new behaviors and habits.  What I cannot do is alter those habits once I establish them into my daily routine.  Perhaps that is the point of this entire post.  If you find yourself becoming stuck in your routine and you ignore signs that the routine is more harmful than beneficial, I strongly encourage you to find a goal partner who is willing and able to tell you to knock it off.  I rely mostly on my own data collection but obviously that approach fails me at times.

I spent a fair bit of time examining my training and preparation history for climbing and other sports and realized that as I got older, I needed more variation and less routine.  Also, I required more rest after hard efforts.  Preparing for Everest this year has been a lot less stressful.  I now train 5 days per week and often take some really easy days - even ones that are not scheduled as "rest" days.  Now, I am sick less frequently.  I am emphasizing sleeping and eating more than training to ensure my health before I take off for Everest.  Last year I was fit but sick when I left.  This year, I plan to be fit, fat, and ready for adventure.

The Wall Street Journal recently printed an interesting article about training to recover rather than recover to train.  I love that idea.  Wish I had more wisdom like that in my lifetime.  Oh well, I guess we all fumble around searching for what works.  Obviously, routines work for me to a degree but I have a hard time shaking them off.

My next blog post continues with the theme of fit and fat for mountaineering.  See you in about a week.